Meet Sally Downie our newest Young Farming Champion and the winner of the 2019 Picture You in Agriculture Scholarship. 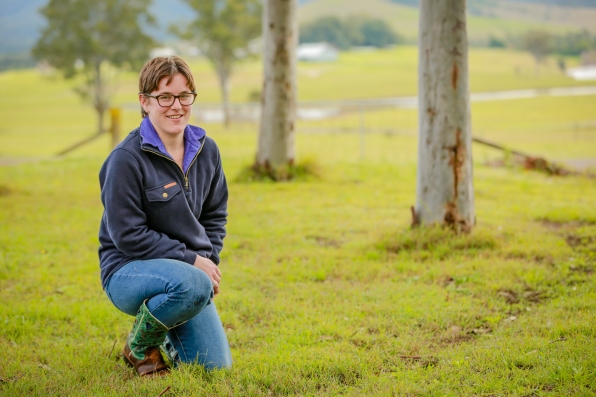 My name is Sally Downie. I’m the daughter of dairy farmers. It’s in my blood.

I grew up on a dairy farm near Forbes NSW with my family. I was the only girl in the family and the youngest. I had some big shoes to fit.A large pair of dirty, well worn boots, the pair you pull on each morning and don’t take off until much later in the evening. They are familiar, comfortable but a token of hard work.  For years I strived to fit into those metaphorical shoes.

Farm life was normal to me. I’d come home from school and be up at the dairy milking cows, feeding calves and following mum around the farm.

In high school I began to show dairy cattle. It became my mission to show an animal of my own at every Forbes Show. I soon began to show cattle at Sydney Royal Show and International Dairy Week in Victoria. It was at these shows my eyes were opened to the opportunities in the dairy industry and the amazing people involved. I really began to look at cows, to see what made a good cow. I listened to the judge, to what they looked for and how they said it. I felt that this was my place.

By my senior years of high school life was very different. I was still invested in the farm and in love with cows. I was determined to be a dairy farmer, just like my mum. But I had my own goals, I had to make my family proud. Academics clicked for me, I did alright in school with little struggle (expect when it came to maths). I would work after school on the farm then come home to get assignments done, burning the midnight oil. To my family this was odd and something my brother found to bother me about. I began to struggle as I became sick. I was back and forth from hospital admissions and an array of tests, my list of absent days grew. I seemed ok but inside life was a living hell. I finished year 12 as Dux. I returned to work on the farm showing no interest in university.

Things fell to pieces quickly. By December I was very sick, February I was in hospital for several weeks, by April I was 33kg but took on the role as Central West Dairy Coordinator with DairyNSW anyway. Again I went to Sydney Royal but I was a mere shadow of myself, tired but determined. By May I was 30kg and absolutely devastated as I was told I’d be sent to hospital and I’d miss a farm tour of a local dairy farm. I tried to convince them to admit me after the tour. I didn’t win. I still had plans to visit New Zealand with the dairy network in June. At the same time my family were told I had three days to live. June came around and I was still in hospital, a feeding tube up my nose, weak, bed bound. In September I was discharged from Royal Prince Alfred Hospital. An eating disorder,that was my diagnosis. How do I live with that? What farmer won’t eat? If dad can’t accept it how can I?

I fell in love, I saw more opportunities in agriculture,

I began a university degree but I also saw another side to agriculture, the silent suffering, the devastation of mental illness. I accepted my illness. I accepted mental health and began to speak out about it I could no longer say silent about such suffering. I allowed myself to roam, to seek new paddocks.

Sally is an alumni of the highly prestigous ABC Heywire Trailblazer program. Read her story here

You can read more stories about Sally here

Sally now works for Forbes Council as their drought resilience officer. We are very excitied to have Sally join the team.

Author: Picture You in Agriculture

The world needs creative, innovative and courageous young people who can connect, collaborate and act. We know that youth may only be 20% of the population but they are 100% of the future. The time is now to let them share their dreams and design the future they want to see. View all posts by Picture You in Agriculture

2 thoughts on “Meet Sally Downie a champion for wellbeing”